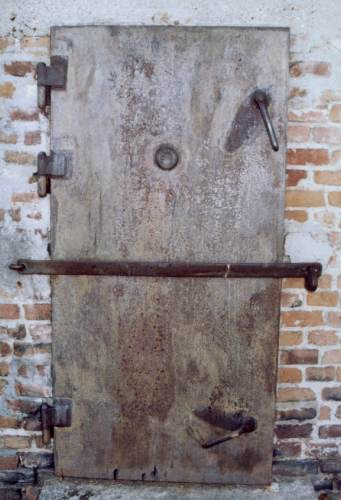 Above: the door of the alleged gas-chamber at Majdanek, of which a replica is displayed at the United States Holocaust Memorial Museum and represented as a "gas-chamber door."

Below: a 1939 advertisement for bomb-shelter doors. Schutzraum, "protection space," is the German word for shelter.

Why use air-tight doors on an air-raid shelter? Prior to the Second World War, as the publisher's name suggests, the possibility of gas attack was not considered out of the question. Also, in the event of fire, it might be advantageous to prevent all oxygen from being sucked out of the room, and hot air from coming in. Oxygen-deprivation was a major cause of death during Allied bombing raids.

For more information about these doors, including uses of the peep-hole, check out engineer Fritz Berg's site.
Posted by Hadding at 6:31 PM