Was the Civil Rights Movement opposed to Identity Politics? Balderdash!

The self-proclaimed conservatives of the Republican Party have a sickening tendency to try to minimize controversy by not challenging the sacred cows that the anti-White left sets up for us all. Thus we hear, for example, Rush Limbaugh speaking in reverential tones of "Dr. King" and "what Dr. King had in mind."

This has been the story of so-called conservatism since the Second World War and it is a tendency evident even in Tucker Carlson.

Last night I heard something very stupid on Tucker Carlson's show. Tucker and his guest lamented the growth of "identity politics" and together declared that identity politics was never what the Civil Rights Movement was about.

Well, let me give you this red pill.

The NAACP -- the National Association for the Advancement of Colored People -- is more than 100 years old. It has identity-politics in its name.

In the 20th century, the so-called Civil Rights Movement was ALWAYS accompanied by identity-politics. It was about achieving gains for specific groups.

First the Blacks were mobilized against Southern Whites within the infamous Black-Jewish alliance, then Northern Whites were targeted too. Jewish Cultural Marxists would mobilize any group with a conceivable grievance against straight White males, and even create such groups by proselytizing deviance.

When I hear Tucker Carlson agree with Tammy Bruce that the Civil Rights Movement was opposed to identity-politics, it makes me think either that he is weak, or that he has no memory.

All of this genuflecting toward the Revrun Docta Martin Loofa King -- the figurehead of the Civil Rights Movement -- should be coming to an end now, with all the information that has been published about him.

We used to have identity-politics for White people in the USA, and we were not ashamed of it. We wanted to maintain a White majority and the Immigration Act of 1924 reflected that.  A real conservatism would try to defend that status quo. It is the reason why Donald Trump was elected. The fact that we cannot even openly declare this purpose, and our acceptance of the premise that there is something shameful about it, makes this preservation of our country and our people very much harder to accomplish.

Bill O'Reilly's Terrible Book about the SS -- Part One 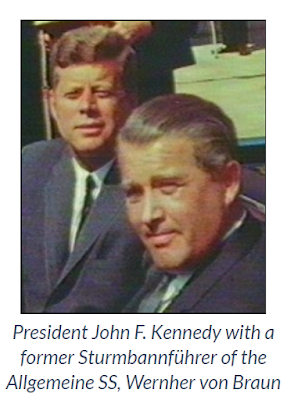 Killing the SS by Bill O'Reilly and Martin Dugard, although number one on the New York Times' hardcover nonfiction list for many weeks, is very possibly the worst book on the subject ever written.

Despite O'Reilly's image as an arch-conservative, this book's perspective is more leftist than conservative, more Jewish than Christian, more Soviet than American. That is no exaggeration!

It is a consequence of the fact that O'Reilly's "conservatism" is based in the new normal that was established during the Carter Administration and then allowed to stand by subsequent Republican administrations under Neoconservative influence. The older conservatives like William F. Buckley, Patrick J. Buchanan, and Senator Robert Taft were skeptical about the Soviet-style justice meted out by postwar tribunals, did not believe that the Soviet Union was better than Hitler's Germany, and saw that so-called Nazi-hunting did not serve American interests.

The book is loaded with flaws, ranging from careless mistakes to what appear to be tendentious misrepresentations. Here is an example. You decide whether this was a mere blunder or a deliberate misrepresentation.

In Chapter Three O'Reilly and Dugard present what they claim is an exchange between Otto Ohlendorf and prosecutor James Heath at the Einsatzgruppen Trial (October 1947 to April 1948). They call it “a classic courtroom Q and A” where “James Heath destroys the SS killer.”

In fact, the exchange is not from the Einsatzgruppen Trial at all, but from the International Military Tribunal about two years earlier, where Ohlendorf was being questioned, not by American prosecutor James Heath but by a Soviet judge, General Iona Nikitchenko.

The misidentification of the source is not the only problem. The exchange includes these statements:


THE TRIBUNAL (Gen. Nikitchenko): And in what category did you consider the children? For what reason were the children massacred?

OHLENDORF: The order was that the Jewish population should be totally exterminated.

THE TRIBUNAL (Gen. Nikitchenko): Including the children?


At the Einsatzgruppen Trial two years later Ohlendorf consistently repudiates the proposition that there was any order to kill all Jews:

Q. Did you know about plans or directives which had as their goal the extermination on racial and religious grounds?

A. I expressly assure you that I neither knew of such plans nor was I called on to cooperate in any such plans. (Trials of War Criminals before the Nuernberg Military Tribunals, Vol. IV, p. 245)


Why did Ohlendorf make admissions in 1946 that he rejected two years later? Perhaps because he had been tortured.

This misrepresentation of Ohlendorf's exchange with a Soviet judge during the IMT as an exchange with an American prosecutor during the Einsatzgruppen Trial is highly consequential. It allows O'Reilly and Dugard to pretend that the accusations against the SS are incontrovertible when in fact there is plenty of reason for doubt.

Is this a blunder or a deliberate misrepresentation? I posted something about it on Bill O'Reilly's Twitter page several months ago but he has never responded.

Read more of my criticisms of this book from CODOH.
Posted by Hadding at 12:37 AM 4 comments: