On the origin of the word Racist 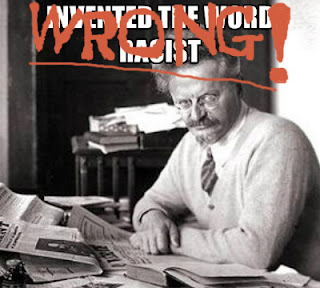 There is an urban legend that has been floating around for some years now, that the word racist was coined by Leon Trotsky, for the purpose of cowing and intimidating opponents of leftist ideology. In his History of the Russian Revolution Trotsky applied the word racist to Slavophiles, who opposed Communism.


Just from the word's etymology (the word race with a suffix added) it is not immediately apparent why this word is supposed to be inherently derogatory. Words like anarchist, communist, and fascist have a negative connotation for many people, but that is because of their perspectives on anarchism, communism, and fascism, not because the words are inherently derogatory. The words anarchist, communist, and fascist have objective content toward which one may be positively or negatively disposed. Likewise the word racist. Objectively, it seems to denote somebody for whom race is a concern.

Is it not possible that Trotsky's use of the word, regardless of what his feelings about racism may have been, was merely descriptive, insofar as the effort of Slavs to assert and preserve their Slavic identity inherently involves a concern with race? Are not racists, as Trotsky regarded them, essentially just a species of anti-Communist, rejecting submersion into nondescript humanity under alien personalities and interests?


What the conservatives like to do instead of debunking their enemies' assumptions, which are also supported by mass-media, is to try to find a way to throw an accusation back at them, even a ridiculous accusation based on a specious argument and a flimsy premise. (I believe that this preference for responding with accusations, rather than truth and reason, derives from the fact that staying on the attack means not having to clarify one's own position on touchy matters. For somebody trying to win a popularity contest in the short term, rather than inform and educate for the long term, it makes perfect sense to try to keep one's own positions obscure.) The legend that Leon Trotsky coined the word racist offers a basis for that kind of rhetoric. It seems a silly argument, but they will say something like, If you use the word racist then you are a bad person like Communist mass-murderer Leon Trotsky, because he invented that word!

Did Trotsky really invent that word? No, apparently not. The work in which Trotsky is supposed to have coined that word was written and published in Russian in 1930.  I found several examples of the French form, raciste, preceding Trotsky's use of the word by far.


Leftist Use of "Racism" before Trotsky

In Charles Malato's Philosophie de l'Anarchie (1897) we find both raciste and racisme:

TRANSLATION: No doubt that before arriving at complete internationalism, there will be a stage which will be racism; but it must be hoped that the layover will not be too long, that it will be rapidly surpassed. Communism, which appears that it must inevitably be regulated at the beginning of its functioning, especially in regard to international trade, will bring about the establishment of racist federations (Latin, Slavic, Germanic, etc.). Anarchy -- which we can glimpse at the end of two or three generations when, as a result of the development of production, any regulations will have become superfluous -- will bring the end of racism and the advent of a humanity without borders.


Although Malato was not in favor of racistes or racisme as such, regarding them as constituting an intermediate stage on the path from the destruction of the existing empires to his ideal of global anarchy, his use of those words back in the late 19th century was clearly not polemical but based on their objective content. Malato saw a tendency in Europe toward reorganizing political boundaries and allegiances along racial (or ethnic) lines, and he called this tendency racism. Note also that Malato refers to Pan-Slavism as a form of racism, thus anticipating Trotsky's specific application of the word.

A piece for National Public Radio (Gene Demby, "The Ugly, Fascinating History of the Word 'Racism'," 6 January 2014) cites the Oxford English Dictionary to the effect that the first use of the word racism (in English) was by Richard Pratt in 1902, five years after Malato's use of raciste and racisme in French.

Pratt was a Baptist religious zealot who was particularly devoted to stamping out the identities of various North American tribes through assimilation. NPR's author for some reason finds it paradoxical that somebody who condemns racism would be trying to stamp out the racial as well as the specific ethnic identities of Cheyenne, Choctaw, or Muscogee, when in fact it is perfectly consistent. Racism in its proper meaning, as we see with Charles Malato and the Occitanian separatists a century ago (contemporary with Pratt), means concern for one's race (however that race is defined), and an impulse to preserve that race, and, in accord with that, organization along racial lines. To condemn racism as such is ultimately to condemn the preservation of any race, with the mongrelization of all mankind, explicitly hoped by some, being the predictable long-term result. Deliberate destruction of races through assimilation and mixture, as advanced -- although in a more direct and obvious manner than we usually see -- by Richard Henry Pratt with his Carlisle Indian Industrial School, is the ultimate implication of  anti-racism. It is remarkable that anyone pretends to be confused about this.

I find pensée raciste (French for “racist thought”) and individualité raciste (“racist individuality”) in the volume of La Terro d’oc: revisto felibrenco e federalisto (a periodical championing the cultural and ethnic identity of people in southern France) for the year 1906.  Here the word racist was used without a hint of negativity:

TRANSLATION: I express my best wishes for the success of your projects, because I am convinced that, in the federation of the peoples of Langue d’Oc fighting for their interests and the emancipation of their racist thought, the prestige of Toulouse will benefit.

TRANSLATION: This unfortunate South! He is a victim in every way! Ruined, robbed, brutalized, it’s a fate of conquered countries that one reserves for him, and whatever would be likely to characterize his racist individuality and whatever’s survival or worship could make him regain consciousness of himself to snatch him from his torpor and safeguard his moral and material interests, is it good for anything except to be combated and ridiculed?


While racists were bad people for Leon Trotsky, some people in Occitania in 1906 did not share that value-judgment, because they had a different perspective and different interests.

Finally there is the Théorie du Racisme (Theory of Racism) written by a former volunteer of the Légion de Charlemagne, René Binet. He wrote in 1950:


Several years ago, a flag was raised over the world. It is not the flag of a nation, nor that of a party, but the flag of a new breed of men armed with new knowledge and belonging to all the White nations: these men are racists.

The powers of the old world, the adherents of ancient philosophies, the servants of old divinities, have joined forces to combat this type of man and to tear down his emblem.

From now on, everyone anywhere on the globe who opposes the decay of his people, the decline of his race, and enslavement, will be accused of “racism” and “fascism” because he took up the flag.

Thus the time has come for racists to declare openly their will to save those of our values​​ that still can be saved, and to proclaim before the obsolete world that makes an insult of the word racist, what it really means to be racist.


Why should I accept the value-judgments of my enemies? The label racist is only an effective attack if it is perceived as one, which means, only if the value-judgment attached to it is accepted. Don't accept that! If you can stop worrying about being called a racist, if you can refrain from  using a barrage of flaky counterattacks (the way "conservatives" do) to avoid talking about your own real views, then you can be sincere and really communicate with people. You might even have a chance to explain that almost everybody is racist and that it's normal -- which is a fundamental fact that every White person needs to know.
Posted by Hadding at 5:06 AM

It might be possible to rehabilitate these type of words by spelling and pronouncing them in French. (A "Frankensteen, not Frankenstine" ploy.)

But, Trotsky and his commie pals gave the word the meaning it has in the English language, the dictionary meaning. No need to quibble with those who credit it to Trotsky.

They abused the word fascist in exactly the same way. Should we run away from using the term fascist where it is objectively accurate because of that?

I don't care so much if people go to the specific trouble of rehabilitating the word racist -- although letting the enemy have a free rein in determining connotations of words in general seems to me a really bad idea.

I do care if people base an argument on a false claim. I have shown here that Trotsky did not coin the term racist, and that it was originally an objective term, with either a positive or a negative connotation depending on one's own perspective.

You nationalist-socialists confuse the hell out of me. As I look through your site, there are blatant antisemitism, yet you support the left wing using the term racism to destroy political enemies? Fix yourselves!

Tom Cruise, it is not apparent from your comment that you read the article.

I see that somebody called Ezra Claverie cited this article in a publication called "Intensities: The Journal of Cult Media." http://intensitiescultmedia.files.wordpress.com/2014/01/e-claverie-lovecraft-fandoms2.pdf

Unfortunately he didn't actually READ the article. He quoted a single sentence, which he misinterpreted, somehow totally missing the point.

Apparently the guy has a graduate-degree in English. In spite of that, the way he used my work was sloppy.

This article claims something about "the 1872 Synod of Constantinople. For the sake of clarification, let’s reproduce a section from said Synod: ' We renounce, censure and condemn racism'..."

If the quote is genuine that would mean that they used the word as early as 1872. I don't know if it's a genuine quote though...

That Wikipedia article is fraudulent. The council wrote that declaration because they objected to the formation of a Bulgarian national church. They did not use the word racism at all; they used the word φυλετισμός (phyletism), which is best understood to mean tribalism or, in this case, nationalism.

Matthew Raphael Johnson discusses that council and its corrupt motives in one of his talks. Phyletism really is not a sin in Christianity; it is in fact traditional.