What was that thing about "a noble and unique race"?

I was reviewing Frank Capra's terrible 1943 war-propaganda series, Why We Fight, made by Frank Capra working for the United States Army (and often shown on television since then), and came across this alleged quote from Adolf Hitler: 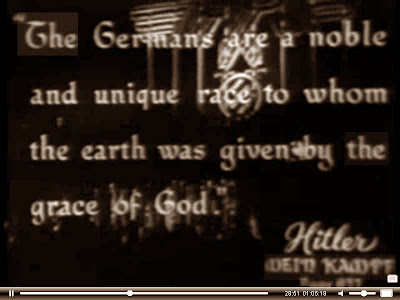 That's from 28:52 in the episode subtitled War Comes to America. It says:

The Germans are a noble and unique race to whom the earth was given by the grace of God.

The key words there are "to whom the earth was given." Obviously, this statement was supposed to lend credence to the claim that Adolf Hitler and Germany were intent on conquering the entire world (a persistent theme of Why We Fight). It is however not an accurate quote but an adaptation of a sentence from the translation of Mein Kampf published by Reynal and Hitchcock in 1941:

Both, yes, both Christian denominations regard with indifference this desecration and annihilation of a noble and unique race to whom the earth was given by the grace of God.[Mein Kampf, tr.New School for Social Research, p. 728]

This Reynal and Hitchcock edition boasted of being "unexpurgated," so that readers might expect to find some statements offensive to non-Germans that were omitted in the authorized translation. Voilà! A shocking statement of intention to conquer the world, straight from Hitler himself!

But there is a problem. The translators of the Reynal and Hitchcock edition were a committee assembled at the New School for Social Research, a leftist institution that had received a large number of refugees from Germany and where there was presumably very little sympathy for Hitler's ideas. It seems therefore a good idea to verify the accuracy of the translation.

When you go to the German text of Mein Kampf, you find this:


The word for earth there is in the dative case, der Erde, which would normally be translated as to the earth or for the earth. It is impossible for a competent translator to make out of this "to whom the Earth was given," since that would require die Erde, nominative case. The Reynal and Hitchcock translation has inverted the relationship between the thing given and the recipient of the thing.  James Murphy's translation, published in March 1939, rendered the sentence as follows:

The two Christian denominations look on with indifference at the profanation and destruction of a noble and unique creature who was given to the world as a gift of God's grace. [Mein Kampf, tr. Murphy, p. 429]

But really, Edgar Dugdale's abridgement, the first English rendering of Mein Kampf, the authorized translation from 1933, was already perfectly good on this point:


The two Christian churches are looking on this pollution and destruction of a noble and unique existence, granted by God's grace to this earth, with indifferent eyes. [Adolf Hitler, My Struggle, tr. Dugdale, p. 225]

The notion (which I have seen propagated on television) that the New School's committee of translators was somehow more honest and more accurate in representing what Adolf Hitler said turns out to have been quite wrong, even compared to Edgar Dugdale's authorized translation.

I found a sentence with a similar concatenation of words in F. G. Klopstock's prose summary of his Messiah, which Hitler probably read:

(Now the Conciliator glances around at the throngs of the holy that surround the cross. He dwells longest on the souls of the future human kind. One of the great moments in time had now arrived in which much nobler souls are given to the earth.)


While using a similar construction and some of the same words, Hitler replaces "much nobler souls" with "noble and unique life-essence" to describe the German folk, avoiding comparisons to other peoples in this context. The resonance between Hitler's phrasing and Klopstock's is very strong, and the meaning of der Erde gegeben is the same in both. The resonance is confirmed with Hitler's use of "by the grace of God." He seems to be implying, perhaps subconsciously, an identification of the German people with the perpetuators of Jesus' mission in the world -- but he avoids saying that.*

* According to the Table Talk, Hitler did not believe that Jesus was a Jew, although possibly a mischling. For his idealism Hitler regarded Jesus as most likely a son of one of the Gaulish veterans of the Roman Army settled by the Romans in Galilee. "Jesus fought against the materialism of his age, and, therefore, against the Jews." Hitler makes the interesting, and seemingly valid, point that the Jews would not have turned over one of their own to be tried by a Roman court.
Posted by Hadding at 10:19 AM 3 comments:

Welcome to the Banana Republic

It is confirmed that vote tallies unfavorable to Mitt Romney were nullified in Maine's Republican primary. Similar fraud was reported in several other states.

Ron Paul's campaign calls itself "the Ron Paul Revolution." In some ways it really does represent a revolution, a complete change of direction, especially in foreign policy, and the Israel-First establishment is hellbent on preventing that. I will not go so far as President John F. Kennedy, who said, "Those who make peaceful revolution impossible will make violent revolution inevitable," since the military power of the government is so great that any civilian would be a fool to challenge it in that manner, but I do expect that there will be a stark decline in respect, not only for the government itself but for the rule of law, if these electoral frauds are not vigorously prosecuted.

If these frauds had been committed to keep a Black from being elected, we would surely see prosecutions. But when it is only White people that are being cheated of self-government, no corrective action is likely to be taken. An attorney friend of mine comments: "You have to get federal prosecutors to do it. That would be a very career-ending idea -- if not sooner then later." Therefore, unless there happens to be a federal prosecutor who is a self-sacrificing idealist, there will be no attempt by the Government of the United States to save itself from the erosion of its own legitimacy.

There is a pattern often seen in banana republics, for example in Guatemala in March 1982, when a presidential election was universally denounced as fraudulent -- the latest in a series of fraudulent elections -- with the result that the sham democracy was overthrown and replaced by a military junta led by Efraín Ríos-Montt. We may see that pattern repeated in the United States during our lifetimes.
Posted by Hadding at 10:19 PM No comments: