A Few Words about Cajun Music

As of 2003, the last time I was in southwesten Louisiana -- Breaux Bridge, Lafayette, Opelousas, St. Martinsville, Eunice -- I found that it was unusual to see anybody not White in a Cajun music club. While the streets outside might be teeming with Blacks, you would find few to none inside where Cajun music was being played. Cajun music is the music of the Cajuns, who are French-descended White people of southern Louisiana.

The French-speaking Blacks of Louisiana, who are not in any sense Cajuns, have their own music with different origins, called Zydeco.

I have read that the "Swamp Cajuns" of southeastern Louisiana are a bit mixed, but I have no firsthand knowledge of this and I am told by a friend from that region that it is not true. I can attest that in south-central and southwestern Louisiana, the people called Prairie Cajuns are very White.

The Cajuns today are not only of French but of German and to a smaller degree, Spanish ancestry, since Spain owned Louisiana 1764-1803. The first Germans in Louisiana were Swabian farmers invited by the Spanish monarchy to settle and farm near New Orleans so that the city would have a convenient food-supply. German names acquired a new French spelling that approximated the German pronunciation; for example Buchwald  became Boucvalt.

There was a substantial German immigration to Louisiana in the 19th century. The Germans who immigrated to mostly French-speaking areas learned French and became "Cajuns." They also brought with them the diatonic accordion, which became the signature instrument of Cajun music.

It is not hard to find faces that look like French, German, and Spanish ethnic types at a genuine Cajun music event that is staged and attended by real Cajun people. But even as of recently, you will see few to no Blacks. I have a certain affection for the Cajun people and their culture, because they are one of the few remaining pockets of some semblance of a White Volksgemeinschaft in the United States.

That is why I found this to be particularly offensive: 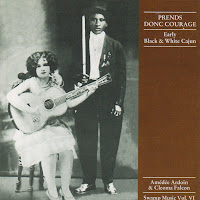 It is a CD cover showing Cléoma Breaux, a prominent Cajenne performer of the 1920s and 30s, seated very close to a Negro, as if they would perform together and were in some kind of partnership. The cover is enough not only to keep me from buying that CD, but to make me have a bad opinion of Cléoma Breaux-- if this CD cover were my only source of information about her. I would be squinting at the image to try to discern if maybe she was a mulatta.


Miss Breaux does not appear to be of mixed race.

In fact the CD cover is an altered image. Here is the original image of Cléoma Breaux, seated next to her future husband Joe Falcon. Both of them are Prairie Cajuns. 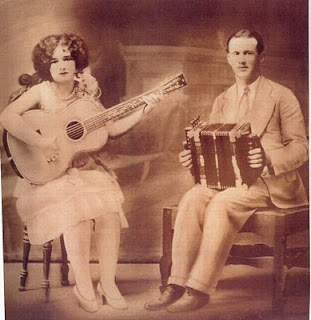 Whoever created that image of a White Cajun woman seated close to that Negro has no respect for the Cajuns, and has used the packaging of a CD as an opportunity to create the illusion of a race-mixing past that never was. Had this been done during Cléoma Breaux's lifetime I have a feeling that she and her family would have complained bitterly. The product bearing that image would have been unmarketable probably in most of the United States, and certainly in Louisiana.

Obviously you cannot believe everything that you hear or read, and not even what you see anymore, so ardent are the enemies of our race to falsify history.

The first Cajun music ever recorded was Allons à Lafayette ("Let's Go to Lafayette") recorded by Cléoma Breaux and Joe Falcon in 1928. Lafayette of course is a metropolis of the Prairie-Cajun region of Louisiana.

The Hierarchy of Needs said...

I like the picture with the negro. She probably fucked blacks just like all other white women do.

In the 1920s and 30s, extremely unlikely. Even prostitutes that were White generally would have nothing to do with Negroes back then.