What is an Aryan?

From Volume I of The American Encyclopaedic Dictionary by W.B. Conkey Company, Chicago 1896. Click on the images to view them clearly. 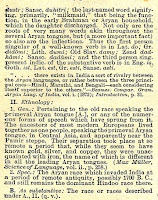 Some important points to observe here are:

First, that the concept of Aryan race was not invented by "Nazis," nor was it even peculiar to Germans; this is from a dictionary published in the United States when Hitler was about six years old. Why then should the word Aryan have fallen into such disfavor that it had to be replaced with the cumbersome term Indo-European, which means exactly the same thing?

In Europe, the modern population also represents a mix of the Aryans with the people that they conquered, but those conquered people were not as vastly different from the Aryans and certainly not as manifestly inferior as were the dark people of India.

There is some reason to dispute whether the Aryans really had their origin as this dictionary entry suggests -- as is still the scholarly consensus -- in Central Asia. As Mallory (In Search of the Indo-Europeans) details, there is a range of suggested Aryan homelands, from the Caspian Sea to Scandinavia. The identification of the Indo-Europeans with blondism works strongly in favor of modern Finland and Sweden as the cradle of the Aryan. This was the view of Madison Grant, and it is consistent with the fact that other peoples of Northern Europe, i.e. the stoneage inhabitants of Germany, were racially similar to the Aryans even before the Aryan invasion sometime after 3000 BC. It is also consistent with the fact that the modern language most closely resembling the theoretical proto-Indo=European language is Lithuanian, which is spoken a very short distance from the world's greatest concentration of blonds, with only the Baltic Sea in between.
Posted by Hadding at 8:33 PM 2 comments: