News about a statue of thuh Revund Doctah Mahtin Lutha King Junia that could only be described as stalinesque inspired me to do a little photo manipulation in honor of MLK's orwellian legacy of fear to speak the truth about race. 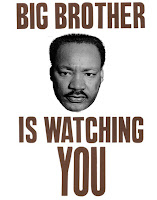 Here is a model of the statue, which is being made in Red China. Perhaps the reason why that MLK statue maintains a block of rough stone as reinforcement from top to bottom is to make decapitation of the statue difficult. Here the detached head of a collossal statue of Joseph Stalin lies in the street during the Hungarian Uprising, 1956.