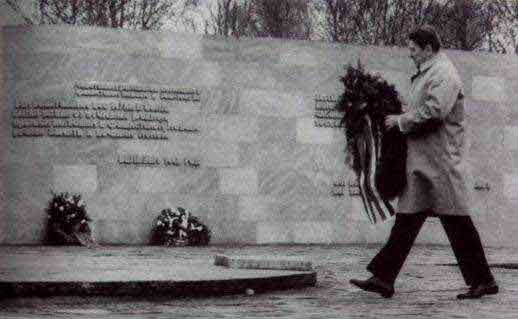 President Reagan lays a wreath at Bitburg Cemetery, Germany, 1985. Press Secretary Pat Buchanan had urged Reagan to visit the cemetery and wrote Reagan's speech calling the German war-dead "victims just as surely as the victims in the concentration camps." Regardless of how this may have been meant, Jews did not appreciate the manifest lack of special reverence for their Holocaust Myth.


A few weeks ago one of my internet contacts pointed out to me a thread about Holocaust Revisionism on the forum at Buchanan.org, because I am well informed on the subject and might have much to contribute. I found that the posters on the forum were not very well informed and indeed there was a lot of educating that I could do there.

For the first three or four weeks, although there was much disagreement, there was almost nobody saying that I should not be allowed to say what I was saying. The only individual who expressed rage at expressions of Holocaust skepticism was a Jew, steve33, who responded with clichéd insults about trailer parks etc. that I ignored, since his demeanor discredited him much more than his insults harmed me. Interestingly, some of the posters on the forum that had been arguing against my position asked the administrator, Linda Muller, that steve33 be removed from the forum. Linda refused to do that, saying that if a Holocaust skeptic is allowed to post then somebody on the other side should be allowed to post as well, notwithstanding the irrational nature of steve33's contributions.

A few days ago, somebody called Andrea Freiboden who had never posted on the Revisionist thread started a thread with the theme that "Holocaust Denial" should not be discussed, because, she claimed, the Holocaust was an indisputable fact; rather, she said, more was to be accomplished by talking about "Bolshocaust Denial," whitewashing of Communist mass-murders.

I had some criticisms of this position. In the first place, Andrea Freiboden would not explain why she believed that the Holocaust was indisputable; she simply restated the same unsupported assertions over and over. In the second place, it is unnecessary cowardice, I would say, to avoid discussing an issue on an internet forum because it supposedly wouldn't go over well rhetorically. Finally, Bolshevism is ancient history and irrelevant -- Who is overtly trying to get Americans to embrace Communism these days? -- whereas the Holocaust Story is crucial to Zionism, which has everything to do with unnecessary Middle-East wars and probably the bankrupting of the US economy.

On 11 May a self-identified Jew with the username Dr. Remulak chimed in on the three-day-old Bolshocaust thread, commending Andrea Freiboden in a rather exaggerated way. Andrea had expressed hostility toward Jews, but for the Jew this was no problem; "Holocaust Denial" on the other hand, totally unacceptable.

The next day, 12 May, Buchanan.org was down for a while and when it came back up, the forum was gone.

It was rather obvious that the forum had been removed because of somebody's reaction to my posts.

There was a third thread on which I had made some controversial remarks, not related to the Holocaust. On a thread commenting on Pat Buchanan's essay "Jim Crow Liberalism," I had pointed out that Buchanan was endorsing the liberal view of Jim Crow Laws, which had the rational purpose of protecting White people from various problems associated with Negroes. Endorsing liberal assumptions, I said, is longterm ideological suicide. This led into a discussion of lynching, which, I was pleased to inform a totally clueless and propaganda-saturated Canadian and Australian, was generally done in response to violent crime, not just out of racial meanness. I said that Black criminality has always been a serious problem and that due process has never been able to cope with it.

It seemed to me however that the removal of the forum was more likely due to my posts about the Holocaust, because there is a well known pattern of organized pressure being used to suppress questioning of the Holocaust Myth. For example, there is the current pressure on Facebook, which I understand has already resulted in a few Facebook users being removed.

Later I found out about Menachem Z. Rosensaft's complaint in the New York Daily News. (Rosensaft is General Counsel of the World Jewish Congress, having been appointed in March 2009.)

It was a bad decision to take down the forum, because instead of an unmoderated forum with one thread called "Discussion about 'the Holocaust'" with people posting on both sides of the question, and another thread with the theme, Don't talk about the Holocaust!, and dozens of threads having no relation to the topic one way or the other, it became, in the words of the Jewish Telegraph Agency, "Buchanan's Holocaust Denial Forum," and, the forum having disappeared, nobody could check to see how absurd this characterization was.

It's also too bad that the forum didn't stay up so that people could see how Rosensaft cherrypicked the less credible statements from the thread. I think that the most egregious comments that Rosensaft quoted were from Schnapps, whose username is not without basis. Although I was by far the main revisionist on the forum, only one of those ostensibly representative statements was posted by me, the one about the Holocaust Myth being exclusively of Jewish origin, which is well supported in its original context, Professor Robert Faurisson's 1986 essay, "How the British Obtained the Confessions of Rudolf Höss."

Taking the forum down says, We have something to hide. Leaving it up would have left Menachem Z. Rosensaft looking ridiculous to anyone who bothered to investigate. Taking it down made Buchanan look cowardly to supporters and guilty to critics.

The complaint about the forum was nit-picking, criticism based on a silly excuse rather than a real concern. Removing the forum will not reduce the attacks on Buchanan even a little. The Jews have accumulated a long list of perceived grievances against Buchanan that is the real basis of their hostility, and removing the forum from Buchanan.org will not change that.*

It was such an irrational decision to take the forum down, seemingly based on an exaggerated momentary panic -- which to me seems uncharacteristic of Buchanan -- that I am inclined to think that the decision was made not by Buchanan but by the website's owner and administrator Linda Muller. This looks like a female decision to me.
________________________________________
*What they call Buchanan's anti-Semitism seems to be really just a lack of special reverence for the Jews on Buchanan's part. Currently Jews are particularly irate over Buchanan's renewed defense of John Demjanjuk, who is to be tried as a war criminal in Germany even though he has already been tried and released due to lack of evidence in Israel. It does not take a Jew-hater to say that this is beyond unreasonable; it only takes somebody without any special reverence for the Jews and their Holocaust Myth, and that is Pat Buchanan.
Posted by Hadding at 10:02 PM 5 comments:

Conor Cruise O'Brien (1917-2008) was an Irish politician and author of histories who took a critical look at Thomas Jefferson and came to the conclusion that Jefferson was anything but a suitable icon for the cause of racial tolerance.


The factor, however, that is bound eventually to eliminate a personal cult of Thomas Jefferson from the civil religion of a multiracial America is not his record in relation to slaves and slavery, but the policy laid down by him in relation to "free Negroes." Jefferson's vision of the future America -- after the hypothetical abolition of slavery by the slaveowners themselves -- is a lily-white one. All the ex-slaves are to be deported to Africa. In the meantime, free blacks have to be eliminated from Virginia. Jefferson's proposals for their elimination were too draconian to be stomached even by his fellow slaveowners (above, chapter 7). His proposed (and rejected) amendments to the Virginian legal code included a recommendation for the penalization of what Virginian slaveowners called "miscegenation": by which they always mean sexual intercourse between black men and white women, never between white men and black women, an event of frequent but unmentionable occurrence. Jefferson made provision for the case of a white woman who might bear a mulatto child. Both the mother and her child were to leave Virginia, immediately after the birth. In the event of their failure to do so, mother and child were declared to be "beyond the protection of the law." In the circumstances, that proposition was a license for lynching: for the physical destruction of mother and child by any Virginian who might care to do the job. Volunteers would not be lacking.


Mr. O'Brien makes the legitimate point that there has been a double standard for males and females in regard to miscegenation, but there are good biological reasons for that, including the fact that when a Negress bears a mixed-race child, it is the Black, not the White gene-pool, that is thus corrupted. This too can have bad consequences for Whites as the differences between the races become less stark, and as Blacks are provided with relatively intelligent mixed-race leaders like Frederick Douglas and Booker T. Washington, but that is a longterm and indirect danger, whereas the effect of introducing Negro genes into the White gene-pool is direct ruination.
Posted by Hadding at 1:39 PM 1 comment: